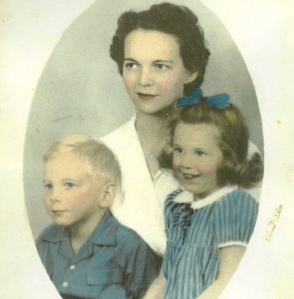 We met at a tree-lined, lakeside picnic shelter on Saturday afternoon. The Kintzes, having juggled nap times and an ornery three year old, arrived late, and we entered the scene carrying a gigantic, unnecessary watermelon. But as soon as we stepped out of the car, we were met with the warmth specific to family – that strange, but instant bond.

The tables were filled with fried chicken and pasta salad, ham biscuits and Chex mix. They were lined with people I hadn’t seen for five or ten years or more, and yet I was known to them, if not in my present state, certainly in some past version of myself, which, in some ways, matters more.

The cousins I tended to when they were babies are lovely young women now – almost the same age I was when I was their babysitter. And yet, somehow, the cousins who knew me when I was in diapers looked the same to me: still my senior, but otherwise only vaguely aged. There were too many people missing, which I guess is the hard thing about family reunions; they were there in photographs and conversations. It was a scene in which I could easily picture my father – the reason I was there – and if I had the power, I would have put him on the picnic bench eating fried chicken, wearing his suspenders and belt and that smile that always seemed to know more than it was telling.

Family reunions are sort of funny if you think about them. All those disparate parts, far flung, gathering for one hot afternoon, or one long weekend, in hopes of conjuring up connection. It doesn’t sound like it would work, or that it might even matter that much. Why pack the kids in the car for a five hour drive so that a collection of relatives can lay eyes on them/us, or vice versa, for such a short time?

I know that it is a beautiful thing to see my dad’s sister’s kids watch my baby girl wriggle from my arms and crawl away from the shelter, so that the raindrops from a sudden summer storm could douse her. And that that moment was made all the more meaningful, for me, at least, because my dad and his sister aren’t here anymore. No one called us to to give any guilt trips, or to suggest someone’s feelings would be hurt if we didn’t show. We came because of that invisible thing, specific to family, that requires our presence, and because we wanted to capture it, if only for an afternoon.