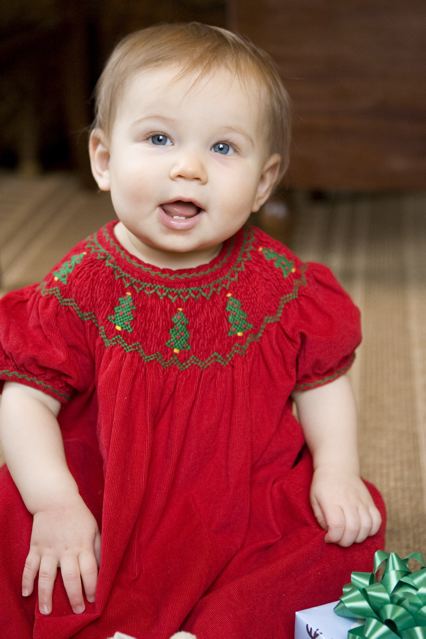 On Saturday morning, Claire awoke in a happy mood, babbling in her crib for a good long while before demanding to be taken out and given milk.  When she finally did “call” for us, Andrew and I were still feeling lazy, so we pulled her into bed  for what we hoped would be some nice baby snuggle time.

But our unmade bed is to Claire a fascinating obstacle course.  She crawls over stray pillows and random coverlet lumps as though she is an all-terrain vehicle, plowing through the rumpled sheets while making sounds akin to a sputtering engine.  In dim light, she finds our faces with her little hands and grabs hard at our noses, or slaps our cheeks.  Occasionally, Claire will face plant into a pillow and suck her fingers for a hopeful moment, but this is just a way to buy some time while hatching a plan for her next adventure. Always, she heads towards the nearest edge of the bed, which is 32 inches high – a number we know because we had to measure it after Claire, at six months, rolled off.

All of this makes for a less than restful snuggle. But it’s fun, and it delays the beginning of our inevitable morning routine.

At some point during Claire’s Saturday morning theatrics, Ivy sensed a good time and bounded onto the bed with us.  The baby, who was delighted, and completely unphased by Ivy’s tail,  giggled and squealed “EyeBee!” All other babbling we have been able to write off as just that, but the “EyeBee” we heard from Claire on Saturday was an intentional first.  She’d put two and two together.  Today, she did it again.  At lunch, I caught her passing  pieces of chicken and cheese to her new best friend, the vehicle for her first intellectual milestone: EyeBee.

Just as Claire ends 2008 with her first word, I end this year closing out “Joyful Things”.  Certainly, as I’ve continued to grow as a writer, this site has become a surprising tool in helping me suss out fake narrative voice – too many of my friends read this for me to go around putting on airs – and, it’s served as a constant reminder that writers are never truly out of ideas.

In closing, I hope this little blog has captured the wonder of the every day, that it has rung true, and that it has pointed to the power of paying attention.  In writing, I think that’s what we’re all after – or at least I am.  I’ll keep doing it, in a somewhat more structured way of Wandering at www.proximitymag.org, beginning January 1.

Proximity is a collaborative project with two of my writer friends, Carrie Kilman and Maggie Messitt, narrative journalists in Madison, Wisconsin and rural South Africa, respectively.  Each week, we plan to spend an hour at a chosen location in each of our cities (coffee shop, bus stop, restaurant, etc.) and write around that theme.  Later, we’ll ask readers to contribute their own posts in what we hope will become a global portrait of common ground.

I hope I’ll see you there.  In the mean time, Happy Holidays!